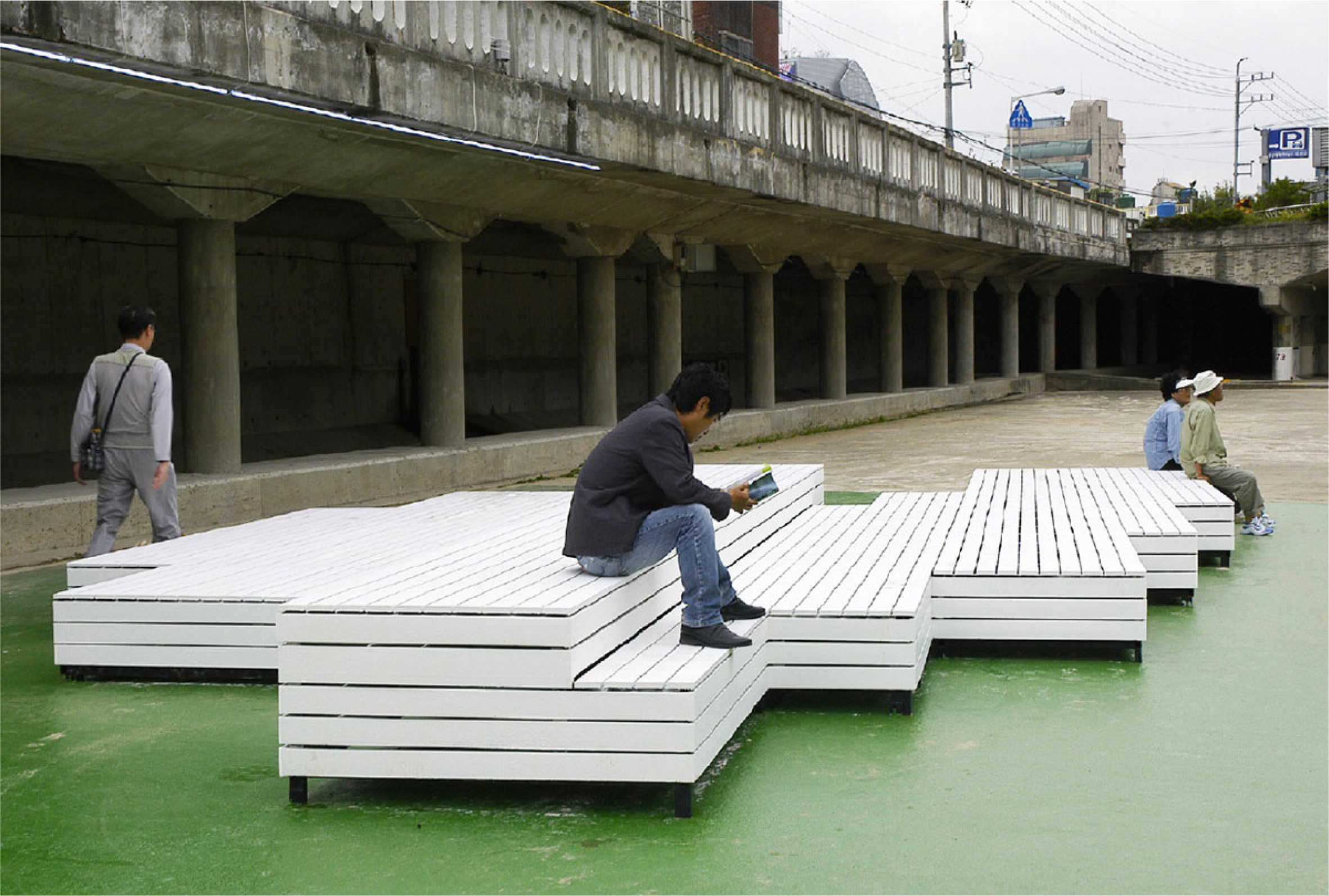 Runningwater, (W)right House combines two elements : the principle of the Korean “Pyung Sang” and the plan of a house conceived by Frank Lloyd Wright named Fallingwater. The seating plateau reproduces, on a smaller scale, the outline of the house in Pennsylvania, located near a river, like the site in Busan. Apart from this fact, the contrast between the two situations couldn’t be bigger. On the one hand, a rich man’s home in an idyllic spot of a calm and serene forest, on the other hand a public art installation in an urban “jungle”.

The site next the subway station of Busan University is in a busy mixed district of dwellings, shops, craftspeople, restaurants and bars. But it appears that this district is partially endangered by imminent construction of high-rise buildings. A group of inhabitants has “squatted” fragments of the public space for their needs, building their own idyll with humble means: two meeting places, one on the sidewalk near the street, and one lower down, near the river.

Using public space is a right of the inhabitants. They did the right thing by bringing life to public space. And they express a desire. Runningwater, (W)right House comes to meet this desire. 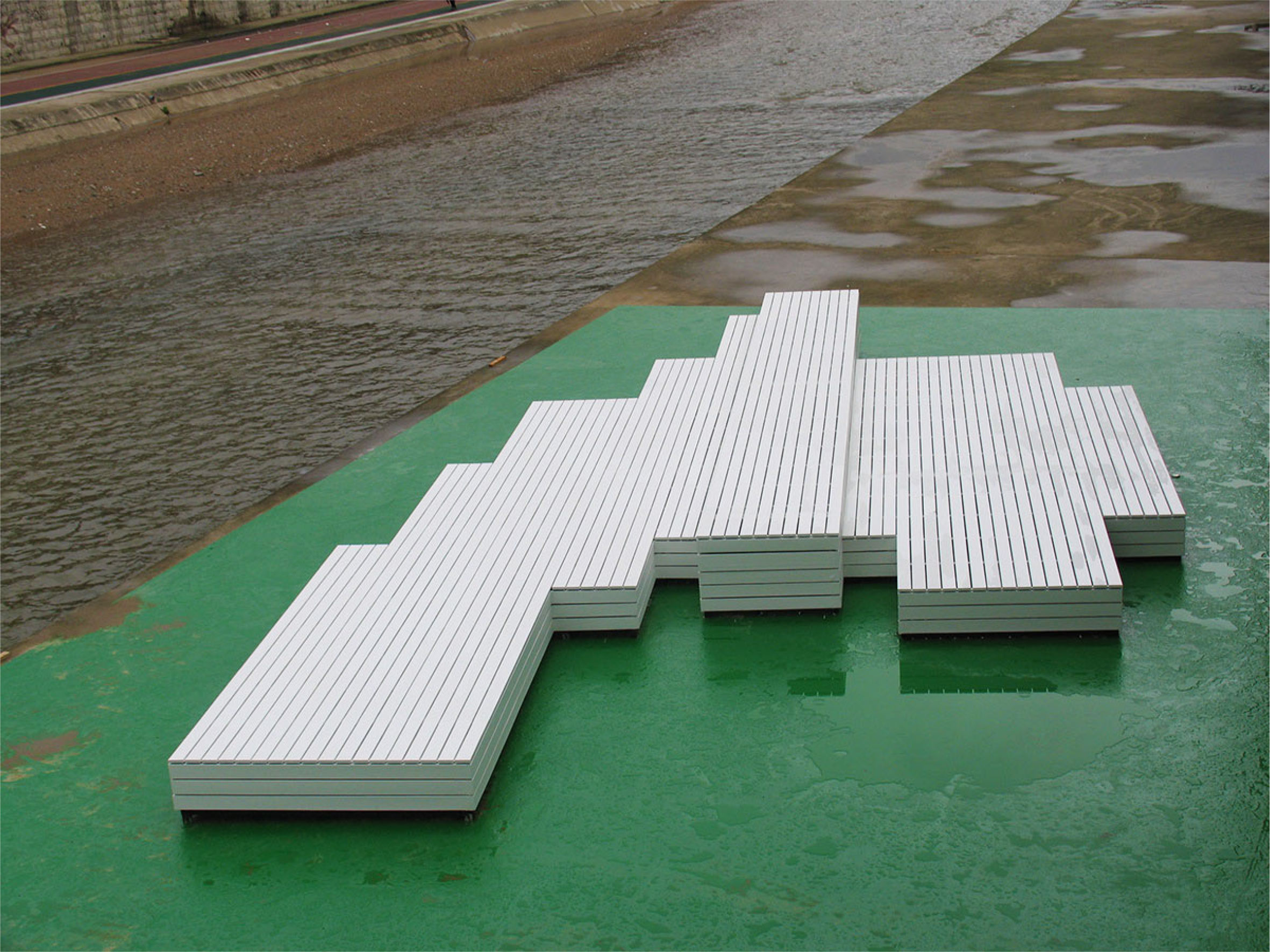 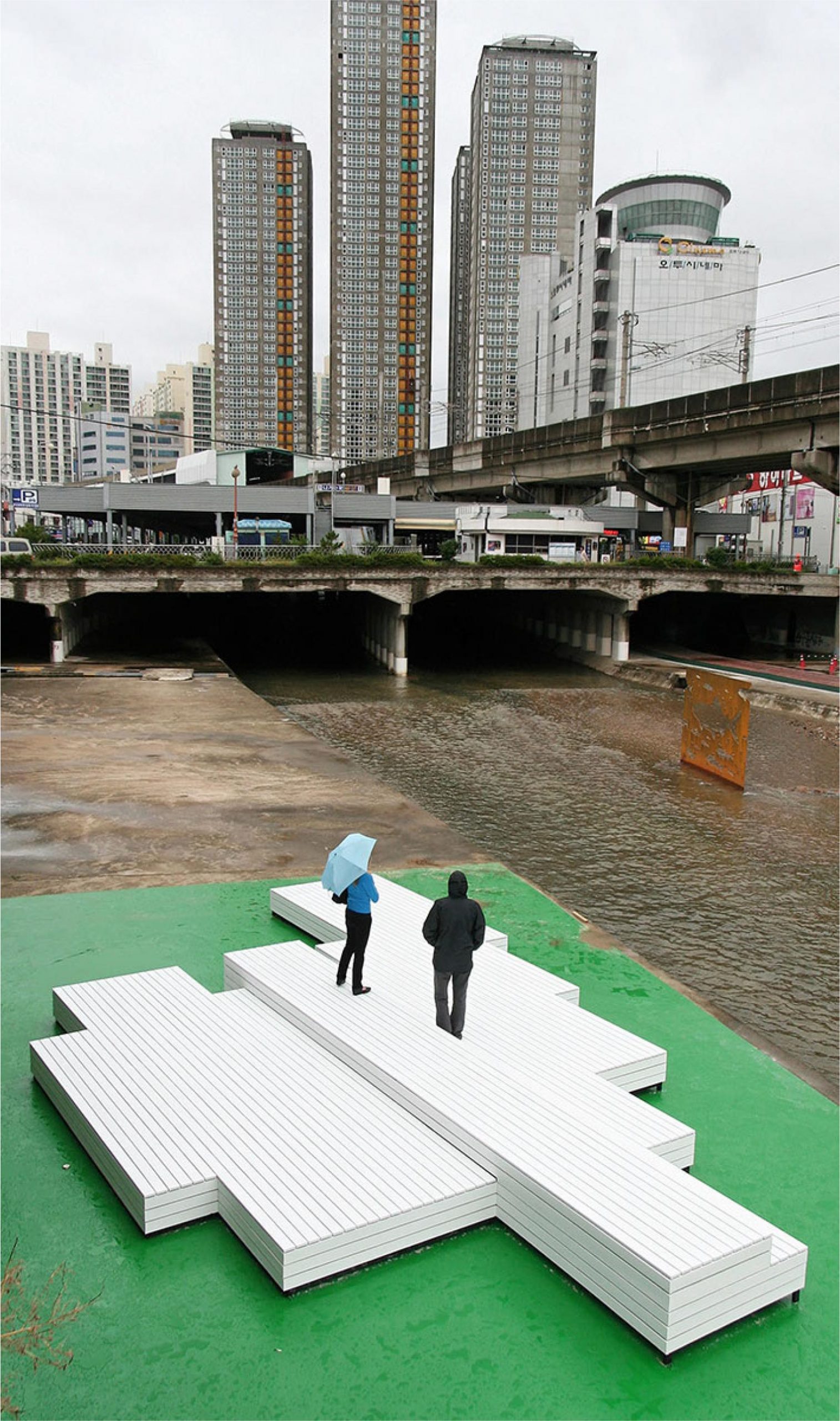 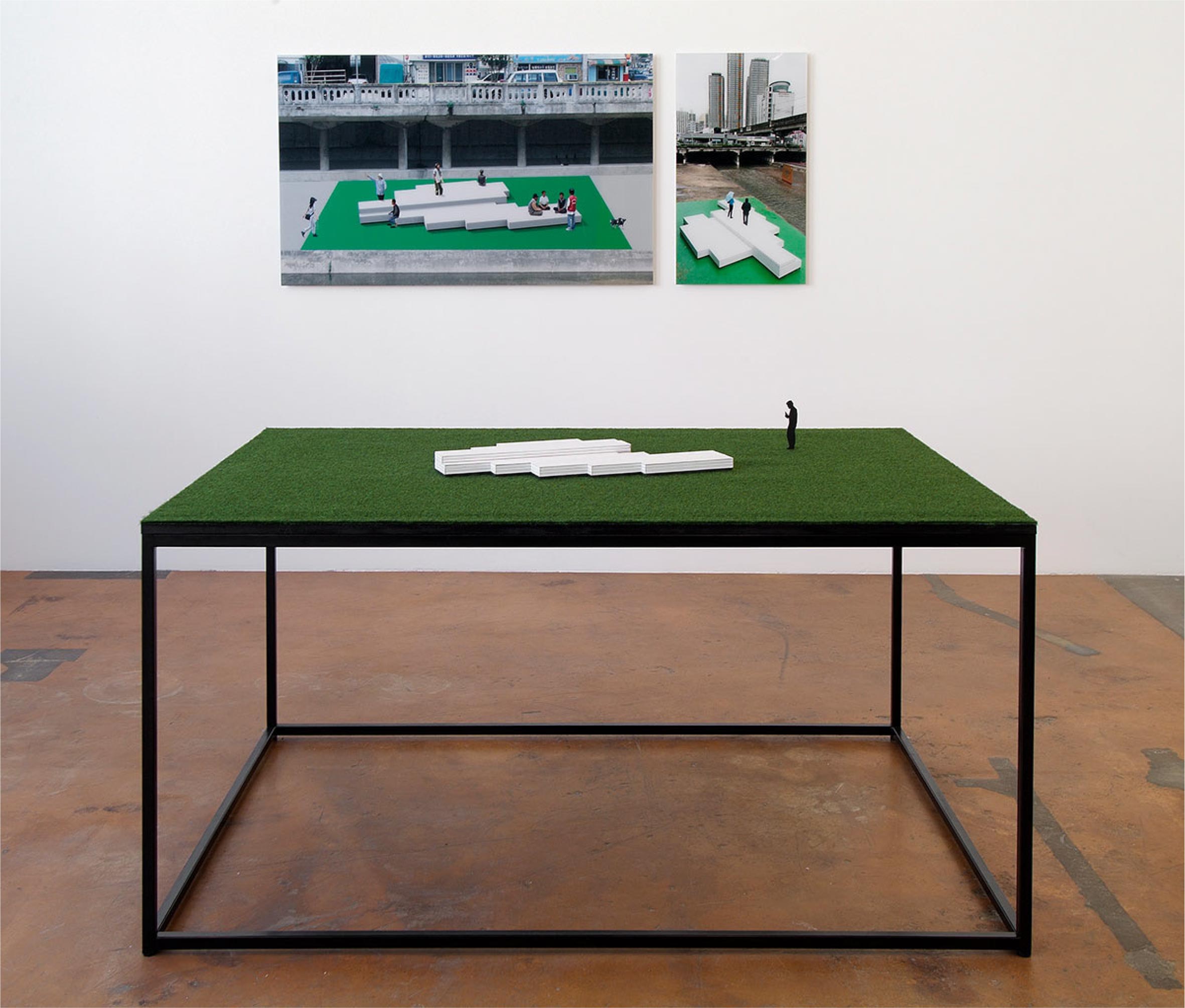 Bert Theis scrutinizes the low-rise tables that one often encounters in the allies of Busan. Running Water (W)right House was conceived by both the low-rise table and the plan for the renowned house in Pennsylvania, Falling Water, by Frank Lloyd Wright. The exterior form of this piece is a reduced version of the house by Wright that is located by the water. Whereas the location of Wright’s house is a quiet and ideal place, the low-rise table in Busan is situated within public space, a kind of urban ‘jungle’.

The immediate vicinity of the exhibition CAFE3 is situated next to Pusan National University, where residential apartment complexes and commercial establishments are all mixed up. It is a busting area of high density in which large buildings continue to rise and the urban landscape changes on a daily basis. Despite such confusion and disorder, residents occupy a small area of public space as deemed necessary by their own accords. This work is a space intended for their rest and dialogue. 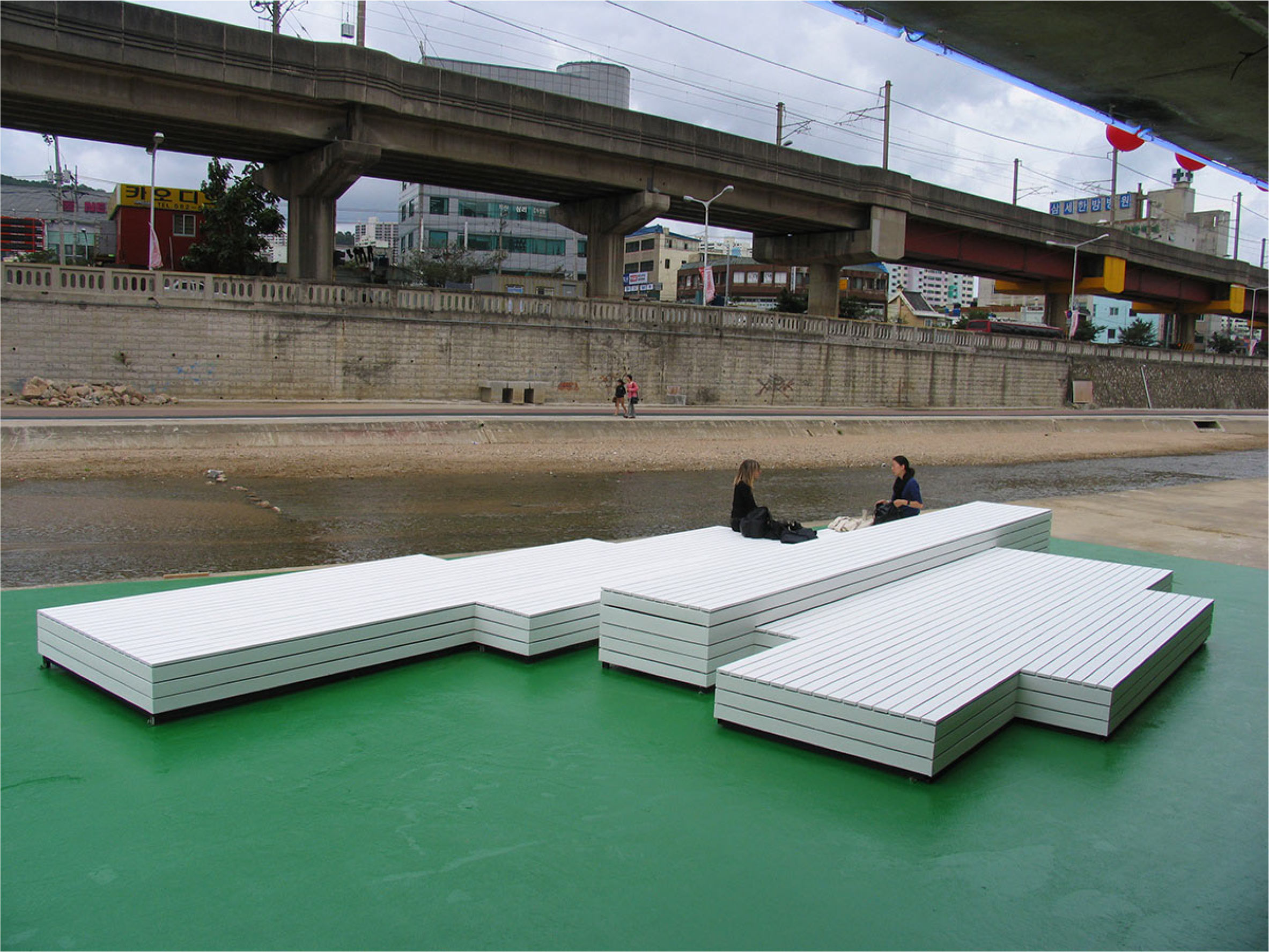